Learning More About Ruby on Rails Over Dinner With SmartLogic

After sponsoring the Bmore on Rails Workshop for Women at Betamore in February, we wanted to keep the learning going. So we invited some of the workshop participants to talk Rails and software development with our team at SmartLogic's Canton office. 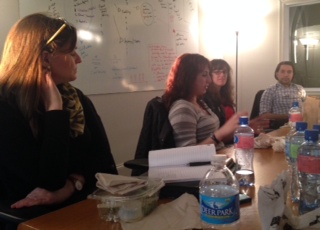 The skill level varied from beginner to others like Angelique Weger, from Girl Develop It Baltimore, who is currently working as a front end web developer.

Over dinner from Atwater's, SmartLogic's Dan Ivovich and Brian Sierakowski discussed how they got into programming and talked through some of SmartLogic's work.

Via Skype, SmartLogic's Yair Flicker and Sam Goldman chimed in about different programming languages such as Ruby, Python, Javascript and PHP.

For Ashley Jean, hearing how others navigated their way through the development world was motivating.

"I found the conversation to be incredibly insightful and useful as I start to dive deeper into pursuing a potential career in programming," she said.

Maita Pang is also hoping to jump into programming after talking to the SmartLogic team.

"Your meeting gave me the courage to pursue a masters in Computer Science at Towson University, which is less than a mile from my house," she said.

Angelique Weger said while she's active in the Baltimore tech community, this was a new opportunity to connect over tech.

"This was a great opportunity to talk directly with their developers and get a handle on next steps for growing and challenging my Rails knowledge," Weger said.

If you missed our meetup, here are some Rails and IOS app development resources recommended by the SmartLogic team: