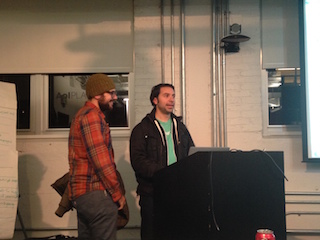 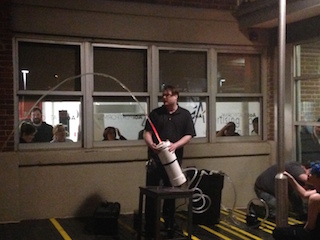 More than 100 people came out for the third annual Baltimore Hackathon this past weekend with a lot of first-timers stepping up and winning top honors.

For Collins, this was his first time at an event like a hackathon. “I met a lot of great people here, kind of opened my eyes,” he said. “As a high school student I had never really seen anything like this before. I was always just up in my niche in Baltimore, this is really cool.”

Another first-time attendee and winner was Paul Grodt. His team won Group Hardware for their Luminar Fountain Dance Pad. For Grodt the project has been in the making for years.

“The original fountain idea I got when I went to Walt Disney World Epcot Center when I was an 11-year-old kid and they had the jumping leapfrog fountain thing and I thought it was amazing,” he said. “And one day I surfed across something that was explaining how it worked and I decided to add it to my list of projects.”

The fountain was supposed to be controlled by a DanceDanceRevolution pad but technical difficulties aside, Grodt said he’s happy with the results.

“We actually predicted pretty close to how it went,” Grodt said. “Our original plan was much more complicated and we predicted we were going to break a bunch of stuff and a bunch of things weren’t going to go right but we’ll hopefully have something at the end and that’s exactly what happened.”

The full list of winners from the Third Baltimore Hackathon:

Growing The Baltimore Tech Community In 2015