Tips for Getting Hired as a Software Developer

Whether you’re a trained programmer with a Computer Science degree or a self-taught developer, it can be hard to find the right company and job for you.

We like to think SmartLogic has some of the best developers in Baltimore, and that our team enjoys working here, so we’ve put together advice from our developers on how they found job openings and got prepared. In our next post, we’ll share their advice on acing technical interviews.

How to find job openings

Sitting at home behind your computer will probably improve your development skills, but it won’t get you a job. The SmartLogic team says getting out and talking to other people in the industry led them to their jobs today. Start talking to your friends, learn about where they work. Developer Carlos Lalimarmo landed at SmartLogic after being recommended by a friend who worked at the company. In turn, he told his friend Giancarlo Bautista about SmartLogic, and now he is a developer with us as well. 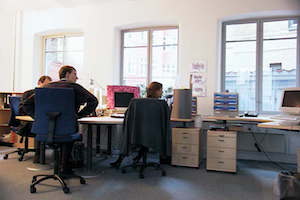 But maybe your friends aren’t developers—no problem! Local meetups are a great place to meet developers and find out about companies that could be a good fit for you. In Baltimore we have B’more on Rails, a monthly meetup for the Rails community that features great speakers and provides opportunities to meet other developers. Developer Matt Menefee was at a Bmore on Rails meetup when some of the SmartLogic team was there announcing job openings. (Full disclosure: SmartLogic sponsors B’more on Rails: We love buying pizza.)

Of course, none of this means that you can’t find a job sitting behind your computer. Dan Ivovich, our Director of Development Operations, found out about SmartLogic via Twitter.

How to prepare for the interview

Once you’ve found a few companies to apply to, submitted your résumé and gotten some callbacks, it’s time to get ready for the interview.

Failing to prepare will guarantee you'll have a disastrous interview. Our developers say the interviews that haven’t gone smoothly can be chalked up to poor preparation.

“I was asked about stuff I was working on, and was caught off guard,” developer Carlos Lalimarmo said. “I learned then that being prepared to present your work is important.”

Part of your preparation should include reacquainting yourself with what’s on your résumé. Sure you know what you can do, but put a little thought into how you’re going to talk about those skills.

“I usually review my resume and make sure I have something to say about each job, degree or technical skill that I have listed,” developer Travis Poulsen said. “I also think about questions I've been asked at previous interviews and how I responded to them and how I might respond to them if they were asked again.”

Knowing how to talk about your skills is one thing, but you also need to practice the skills themselves.

“Code, code, code. Practice, practice, practice. The best way to prepare for an interview is to just do stuff, build stuff,” Giancarlo said. “Some interviews are more technical and require understanding concepts to theory, so it's best to brush up on those as well.”

And or course make sure the laptop you’re planning to take to the interview is set up and running smoothly.

We also have a guide to doing well in a technical interview.

If you’re looking to hire a developer, we can help you with that too:

How to conduct a developer interview

How to find good developers to hire