What I Learned From Organizing BohConf on a Budget

When SmartLogic decided to bring BohConf to Baltimore for its first year as a standalone conference, I knew I would have a lot to learn about running a technology conference—and I was definitely right about that.

Below I’ll break down a few things I learned to give aspiring conference organizers some advice, and to give BohConf attendees a look behind the scenes. Feel free to comment with any advice or feedback on how BohConf—and any conference—can do better.

Here are some expectations I had about running the conference—and whether or not they were met:

Expectation: It’d be fun to do this for cheap, on a budget.
Realization: While doing BohConf on a budget made it more inclusive and affordable for attendees, it required a lot more time on my behalf, and made some of our decisions as organizers more challenging. Because we lacked resources, some of the little things that needed to be done before the event didn’t happen until the very last minute, for example deciding on the schedule and publishing it to the website. All of the little things really add up, and you can’t cut corners. Now I have a much better idea of what those little things are, and I’ll be able to plan resources and timeline better for next year. If you’re interested in replicating the low-budget model (proceed at the risk of your own time), I go into more detail on how we made it work at the end of this post.

Expectation: BohConf wouldn’t be that much work for me because we had the right volunteer organizers.
Realization: While we had some great volunteers like Jonathan Julian, Kate Bladow, Nick Gauthier, and the rest of the organizing team, we could have used a lot more help. Perhaps it was tight timing, my perfectionist tendencies, and/or lack of delegation, but we ended up spending a ton of time on the event—personally, I spent over 100 hours. The opportunity cost of those hours for SmartLogic’s business is huge. Looking back, I probably would have structured the conference fees and sponsorships so that the event would earn enough to justify hiring event planning professionals, or having SmartLogic employees spend more time on the event as part of their jobs.

Expectation: We’d sell out!
Realization: We did! I could write a separate article about how we accomplished this, but basically, we found a need in the marketplace, and built a product to fill that need. One of the most effective ways we marketed the event was reaching out to every local technology group we could think of (Meetups, Facebook groups, CS departments). Plus, we gave out discounts as incentives for those groups to help us spread the word.

Expectation: We’d have more female speakers.
Realization: We reached out to several individual women and groups focused on women in technology. Unfortunately, very few women submitted proposals, and thus we had only one female speaker. However, we did have way more female attendees than I expected. As was the case with any event where I’ve ever had a role in ordering t-shirts, we made sure to order women’s shirts.

Expectation: Keeping the theme of the conference relatively open would result in an event that would appeal to a broader audience.
Realization: We did attract a broad audience, but keeping the theme of the conference open confused some people who were submitting talks, caused some people to hesitate about buying tickets, and made it harder to create a cohesive schedule. We ended up with some very technical talks interspersed with higher-level business talks, which did not flow well. In the future, I think we should still keep the theme wide ranging, but lump similar topics into separate tracks.

Expectation: That it would be quick and easy to get sponsors.
Realization: We had some awesome sponsors for BohConf, but I know we could have gotten more if I’d made more time to reach out. I should have asked for help reaching out to sponsors, or started working on outreach earlier.

Expectation: Running alongside Artscape would present logistical challenges that would result in negative feedback.
Realization: There were no negative sentiments expressed with regards to Artscape. Everybody seemed to enjoy being able to walk around Artscape at lunch and after the event. Further, everyone showed up on time and parking wasn’t the nightmare I expected it would be.

Expectation: We’d have awesome t-shirts.
Realization: Obviously, we did. 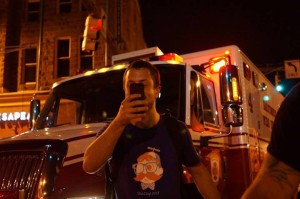 How We Ran BohConf On a Budget

To put that in perspective: look at Ancient City Ruby, a two day regional ruby development conference held in St. Augustine, Florida. Their “Platinum Doubloon” sponsorship package is $5,000 and that’s not even their top dollar sponsorship. BohConf’s entire budget was only a little more than one sponsorship of Ancient City Ruby.

Of course, Ancient City Ruby is twice as long as BohConf, running for two full days rather than just a night and a day. But the ticket pricing for Ancient City Ruby doesn’t reflect a doubling of costs. At $299, it’s about 7 times more expensive than a $40 ticket to BohConf. When you factor in that we widely distributed discount codes, that $299 seems even more expensive.

Note that we’re picking on Ancient City Ruby here, but this is typical of most regional app development conferences. As I found out with this year’s BohConf, it’s not easy to run a conference on a budget.

Help: University of Baltimore donated the space and wi-fi. The Baltimore Foundery donated space for the opening party. Woofound donated their time and equipment to record every talk. gb.tc staffed the check-in table. All of the speakers donated their time to talk. Without this help, our costs would have risen exponentially.

Hard work and more hard work: Volunteer organizers, SmartLogic employees, and myself all put a ton of time into organizing BohConf. The hard cost budget does not count the opportunity cost of all of that time. When you count the time organizers could have been spending on our businesses, we didn’t really do BohConf “on the cheap.” Know that going in if you want to replicate our budget.

Running BohConf on a budget challenged my expectations in many ways, and next year’s BohConf is going to be better because of everything I learned. Again, please feel free to comment with any feedback or advice.

For more on BohConf, check out Eric’s post collecting interesting links to follow up on from the talks, a write-up on BohConf 2010, and check out SmartLogic’s SlideShare to see some of the presentations.