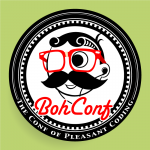 After an exhilarating week of hosting the Rails community in Baltimore for RailsConf, I thought it'd be helpful to share the lessons that we learned organizing BohConf.

We had a strong showing of open source authors including Wayne Seguin, Gregory Brown, Aslak Hellesøy, Chris Eppstein, Nick Gauthier and various members of Thoughtbot crew. Wayne (rvm) and Greg (prawn) in particular raved about the contributions they were able to make to their projects. Hey, I even got a new release of Timecop out thanks to a patch from Larry Marburger. Other well known OSS authors that dropped by included Rick Olson, Patrick Peak, and Josh Nichols. If you were there and we missed you, please drop us a line in the comments! 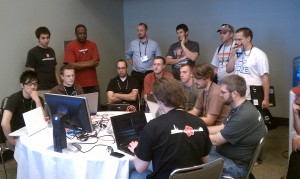 One problem that we had was that people entering BohConf did not have a sense of what was actually taking place. Despite having a schedule posted online, it was often not clear what was underway. During the community code drives, we should have had signs next to each table pointing out which OSS authors were there to work on which projects. During the BarCamps, we could have similarly posted signs that indicated which discussions were happening at which tables.

The thing about being internet (nerd) famous is that that doesn't necessarily mean that anyone knows what you look like. It would have been cool to post photos on the website of the OSS authors who were currently working the Community Code Drive. Similarly we could have posted the current BarCamp sessions on the website. A countdown to the start and end of the programming contest would have been cool too.

Give a bunch of nerds a dataset, a deadline, and no rules, and you get some pretty awesome efforts. Our client SpotCrime made available a dataset of crimes in Maryland in the past couple of months. Tim Johnson submitted a processing.rb time lapse visualization, Aaron Scruggs submitted a super cool and clever gource visualization, and Greg Brown and several members of his crew (Jia, Jordan and Chenoa) showed a lot of creativity with their submission of Spot the Baddy, a simple but fun interactive game where you can catch the bad guy!

While we were very happy with the submissions that we received for the programming contest, we felt that not nearly enough people were aware that it was taking place. Which also means that nobody knew we were giving out a $100 visa card to the best submission.

A Schedule is Important

When running an unconf for three days, you cannot simply throw out all semblance of organization and expect a success. With various people responsible for different aspects of BohConf, it was very helpful to be able to refer to the schedule when explaining what was happening at BohConf. Furthermore, it allowed us to communicate specifics well ahead of time via Twitter to those who wished to participate. 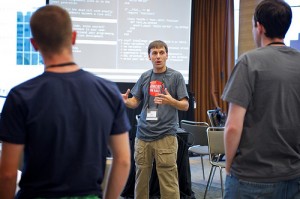 ...but perhaps it wasn't the best choice to displace another BarCamp session. After a wildly successful BarCamp Monday afternoon, many folks returned Tuesday looking for another. Though the code retreat was clearly appreciated by the dozen or so folks that participated, there seemed to be a lot more interest in the BarCamp.

Considering that Monday was tutorial day, it was unrealistic to expect us to maintain the same level of participation Tuesday and Wednesday. Not only was there a big dropoff from Monday to Tuesday, but there was another one from Tuesday to Wednesday. BarCamp Wednesday afternoon was less successful than Monday's, the discussion groups dissipated before we even got to the last session. It's also worth noting that those of us running BohConf were running on fumes by that point which likely contributed to the loss of momentum.

While SmartLogic is instrumental to the B'more on Rails community (as a sponsor and organizer) and the Baltimore tech community, BohConf was actually undertaken entirely by our team at SmartLogic. We felt that we missed a big opportunity to establish our company and individuals as more visible members of the Rails community. Our team members should have all had shirts, and we should have given away stickers and buttons to all attending BohConf. 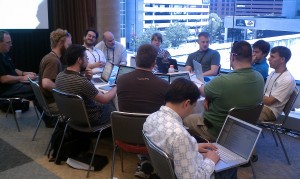 A large format session at an event like RailsConf scales pretty well. As far as you can project a speakers image (in time and space), that's how many people you can reach. Open space events like BohConf scale less well because the effects are personal. The benefit of attending this kind of event is a lot more subjective, because each person's experience is different. This means it's vital that you give plenty of opportunities for people to start conversations. The BarCamp format isn't about presentation topics as ending points, they're conversation starters. The folks who got the most out of the event seemed to be the ones most open to meeting new people and sharing their story.

A fantastic way to get people involved is to simply encourage them to ask, "What are you working on?" Follow up with, "tell me about that" and most geeks, passionate about their craft and otherwise quiet, will talk for an hour.

Don't Be Shy about Asking for Help Promoting

Though we had about 100 followers prior to the start of BohConf, we failed to reach a large segment of the RailsConf attendees before the conference started. Attendee after attendee that I spoke to were hearing about BohConf for the very first time. We should have reached out to Chad, DHH and others to talk about BohConf in the weeks leading up to it. Even a few tweets would've given the event a nice bump.

Get a Bigger Room Next Time

Despite the waning momentum as the days went on, we were still overpacked in the conference room that we had available. Luckily on Monday we were able to hijack the adjacent media room for our use. Otherwise we would have had to turn away to half of the 80+ folks hanging out during the peak.

We had an absolute blast organizing BohConf for the community. Practically all feedback we received was overwhelmingly positive. And there are rumors that we'll be asked to put it on again next year. Whether or not we're the ones to undertake it, we hope that these notes will aid those embarking on similar endeavors.

An extra special thanks to Adam Bachman, Nick Gauthier, Ryan DeStefano and Matt Scilipoti for their efforts in helping to run BohConf.

If you have any comments or critiques of BohConf, please leave a comment below. Thanks to all those who attended!

Want to learn more about BohConf, check out our other articles:

What I learned from organizing BohConf on a Budget